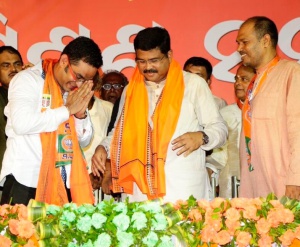 Jajpur: The Bharatiya Janata Party, which has gone aggressive across the State after significant gains in panchayat polls, has managed to boost its prospects further by adding two strong youth leaders in Jajpur to its kitty.

Former Odisha Youth Congress Vice President Biswaranjan Mallick, who was denied ticket by the party from Bari in 2014, has joined the BJP along with thousands of supporters in the presence of Union Minister Dharmendra Pradhan.

Biswaranjan’s induction not only boosted BJP’s strength in Bari, but also created tremors within the BJD camp. BJD leaders Pranab Prakash Das and Pranab Balabantray tried to their best to woo Biswaranjan, but it was too late.

It was Dharmendra Pradhan who received kudos for his brinkmanship and expanding BJP’s base by exploring his political manoeuvre skills.