BJP hits out at govt over farmers’ issues 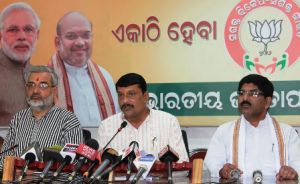 Bhubaneswar: The Odisha unit of BJP on Tuesday came down heavily on the Odisha government over farmers’ issues in the state.

At a press meet at the party office in Bhubaneswar, senior BJP leader and Padampur MLA Pradip Purohit alleged that though around 70% of people in Odisha depend on agriculture, the state government allocates only 15% of the state budget for the farm sector..

The legislator alleged that while the Maharashtra and Andhra Pradesh governments are providing adequate compensation to the kin of the diseased farmers, the Odisha government is reluctant to do so.

Purohit further said that the state government should accept its failure to produce milk, egg and potato in the state.

The BJP leader asked why the state government is reluctant to accept the RTI report on farmer suicide over crop loss.

Meanwhile, JP workers, led by Subash Chauhan, protested over farmers’ issue outside the office of the Sub-Collector in Padampur in Bargarh.