BJD-BJP war of words on Kalma barrage hots up 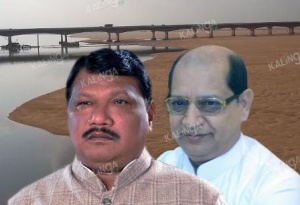 Bhubaneswar: The war of words between the BJD and the BJP on the release of Mahanadi water through the Kalma barrage hotted up on Tuesday with the BJD strongly refuting the claim by the Chhattisgarh government that it had not closed gates of the barrage.

“This is yet another attempt by the Chhattisgarh government to mislead the people of Odisha. They have stopped the flow of Mahanadi water through the Kalma barrage so that they can provide water to industries on their side. They open a few gates every 15/20 days to hoodwink us. The barrage is located close to the Odisha border and we know when the gates are closed or opened much better than the Chhattisgarh Chief Minister Dr. Raman Singh, who lives far away from the place,” senior BJD leader Prasanna Acharya said here today.

Taking a dig at senior BJP leader and Union minister Jual Oram without naming him, the Rajya Sabha member said; “They have grown up in Odisha but are working against the interests of the state.”

Acharya said Mahanadi is not a political issue for the BJD. “It is an issue that concerns the life of people in 15-16 districts Odisha. The BJD, the BJD government and the 4.2 crore people of the state would continue to oppose the illegal acts of the Chhattisgarh government,” he added.

Chhattisgarh Chief Minister Dr Raman Singh had earlier sought to shift the onus for the current stand-off between the two states on the Central Water Commission (CWC). “

Mahanadi has flow of water only for 4 months. We don’t have water to give to Odisha now. They can go to CWC,” he said.

“We haven’t committed any illegality. The barrage has been constructed with the approval of the CWC and it’s the CWC which will determine the amount of water to be released through the barrage,” he had said.

Meanwhile, the Chhattisgarh government has opened another gate of the barrage today, taking the number of gates opened to two.