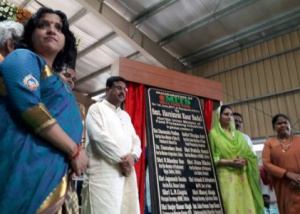 Bhubaneswar: While Union Ministers Harsimrat Kaur Badal, Dharmendra Pradhan and Sadhvi Niranjan Jyoti inaugurated the mega Food Park in Rayagada today, the event took a political colour with both BJP and BJD trading charges over whether or not the Chief Minister was invited to the function.

It was the BJD, which raised the issue first by criticising the BJP for politicising the event and breaching protocol by not inviting CM Naveen Patnaik to the inauguration of the event. BJD Spokesperson Samir Dash accused BJP leaders of arrogance.

The State BJP countered, saying it was the CM who skipped the event, as he did not bother about development. Union Minister Harsimrat Kaur Badal too rejected BJD’s charges, saying she had personally invited CM Naveen Patnaik, who had agreed to send two of his Ministers to the inauguration.