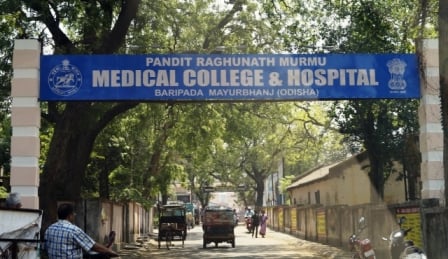 In a major relief to the Odisha Government and to the delight of the people of the predominantly tribal district of Mayurbhanj, the Supreme Court’s Mandate Oversight Committee has given approval for the intake of students at the Pandit Raghunath Murmu Medical College & Hospital in Baripada from this academic year.

The move paves the way for admission to 100 MBBS undergraduate seats the 2017-18 academic session. It also ended the tug-of-war between Odisha Government and Medical Council of India (MCI). The state government had a tough time pursuing its case with the MCI.

Earlier, Odisha Health Secretary P.K. Meherda had written a letter to the secretary of the Supreme Court Mandate Oversight Committee Shesh Kumar, seeking its intervention to do justice to Baripada Medical College by MCI.

Although Odisha had sought LoP for two medical colleges – Pandit Raghunath Murmu Medical College, Baripada and Saheed Laxman Nayak Medical College and Hospital, Koraput in June 2016, the MCI team had approved only that in Koraput, delaying the admission process for Baripada.

CM Naveen Patnaik had taken up the case of the Baripada medical college during his meeting with Union Health Minister JP Nadda recently. Later, BJP gave this issue a political colour, blaming the State Govt with Union Minister Dharmendra Pradhan intervening in the matter.

However, the Odisha Govt, led by CM Naveen Patnaik, outwitted the Opposition by getting the approval directly from the SC Panel.

Chief Minister Naveen Patnaik has welcomed the decision, saying the long-standing demand of the people of Baripada has been fulfilled. It would help provide better healthcare services to the people of Mayurbhanj and adjoining districts, he said.