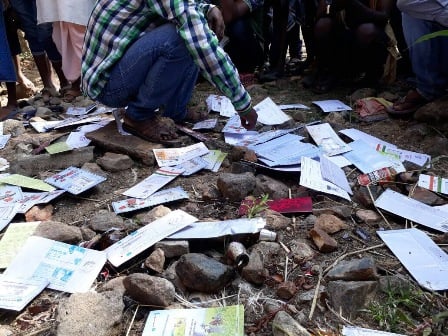 Umerkote: In an incident that sent shock wave across Nabarangpur district, a huge cache of Aadhaar Cards, bank passbooks and ATM cards were found abandoned under a bridge near Bokata village in Umerkote region.

After spotting the documents under the bridge, locals alerted the local police, which initiated a probe into the matter.

The villagers suspect foul play and have sought a high level probe into the incident, holding the local Postmaster responsible for the act. They allege that the postal department has deliberately dumped the important documents, causing immense trouble to the people.

The Umerkote Block Chairman has also alleged that Bokata Postmaster has been callous in his attitude which has resulted in villagers losing their NREGS money in the past. A police complaint was lodged against him in this connection.

In total, 72 bank passbooks, 6 Aadhaar cards and many ATM cards were found from the spot. The cops are trying to hand over the materials to their respective owners. The local Postmaster has denied the allegations and said he had no role to play in the loss of cards and documents.