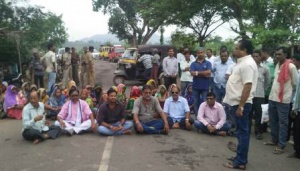 The activists of the saffron party also protested the arrest of Raju Pradhan, a BJP worker. Police had arrested him for attacking the Minister’s brother.

According to reports, Birendra had sustained injury on his head during a scuffle with Pradhan while on his way to Nuagochhabadi last night. Later, he filed a police complaint, following which Pradhan was arrested.

On the other hand, Pradhan’s wife also filed a complaint alleging that Birendra had misbehaved with her, seeking the arrest of Minister’s brother. She also joined the road blockaded along with BJP supporters.

Police have arrived on the spot to pacify the protesters and lift the road blockade.