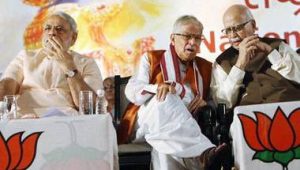 In a massive jolt to veteran BJP leaders LK Advani and Murli Manohar Joshi, the Supreme Court accepted the CBI’s request and restored criminal conspiracy charges against him in the Babri demolition case.

Apart from Advani and Joshi, Union Minister Uma Bharti and several others will also be tried for criminal conspiracy. While Advani was seen as one of the top contender for Presidential Polls, MM Joshi was rumoured to be sent as a Governor to any State. However, the verdict ensures that both of them won’t get any such Constitutional posts.

The Supreme Court said that the matter would be heard on a day-to-day basis in a Lucknow court in a joint trial against Advani and other leaders, including Vinay Katiyar and Sadhvi Rithambra.

The court excluded Kalyan Singh from the trial, as he has been made a Governor now.