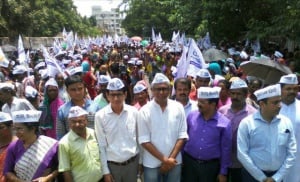 Rayagada: Aam Aadmi Party (AAP) leader Ashutosh, who had arrived in Bhubaneswar last evening, addressed a public rally in Rayagada, which was held to raise various demands before the State Government.

The issues raised by the Aam Aadmi Party included increase in old age and divyang pensions to Rs 1,000 per month, giving forest land pattas to the tribals and providing houses to homeless people.

The rally witnessed a congregation of 4,000 people even though AAP has very little presence in Odisha, particularly in Rayagada.

Ashutosh will hold a press meet at Lohia Academy, Bhubaneswar at around 11 AM tomorrow.