AAP to emerge as a political alternative in Odisha: Asutosh 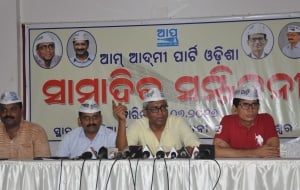 “Naveen Patnaik and his party have failed miserably on all fronts in the last 17 years. The next two years will be tougher for Naveen as he has nothing more to offer. The AAP will emerge as an alternative to BJD, Congress and BJP in Odisha”, he said addressing a press meet at the Lohia Academy in Bhubaneswar.

“Our volunteers are working tirelessly to reach out to the masses. They are working spiritedly to build the party organisation at the booth level across the State. We will leave no stones unturned to expose the government as well as other parties that have failed to fulfill the people’s aspiration,” said Ashutosh.

He further claimed that AAP will be in a position to pose a direct challenge to Naveen Patnaik within two years. AAP’s State Convener Nishikanta Mohapatra and other leaders were present at the press meet.