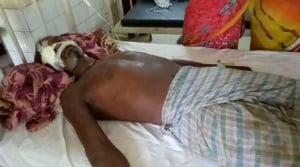 Rourkela: A two-year old girl was trampled to death by an elephant at Jhirpani village of Chandiposh Tehsil in Sundargarh district late on Friday night.

The farther of the deceased minor was also injured in the attack by the jumbo.

According to sources, Durga Singh of Jodabandha village had gone to his aunt’s house in Jhirpani village along with his daughter Sandhya.

As a herd of pachyderm entered the village, everyone in the village ran for life. Unfortunately, Durga, while running to escape the elephants’ fury with Sandhya, came across an elephant which attacked them.

While the minor girl died on the spot, her father was rescued in serious condition and was wheeled into the government hospital in Rourkela.

The death toll in elephant attacks is rising day by day in Odisha.

An elderly man and a woman were killed by an elephant at Ichhabati village under Kamakhyanagar forest range in Dhenkanal district yesterday.