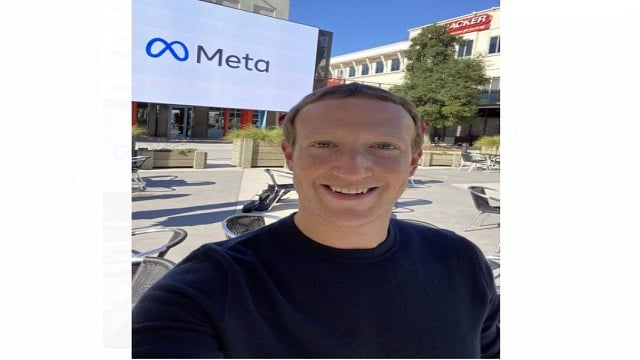 New York: Facebook founder Mark Zuckerberg on Thursday announced that his company will have a new name, Meta.

Somewhat predictably, Zuckerberg downplayed that this rebranding, the first in Facebook’s 17 years of existence, is to divert a barrage of bad PR.

“We are a company that builds technology to connect,” Zuckerberg said. “Together, we can finally put people at the centre of our technology to reflect who we are and what we hope to build.”

The name “Facebook” doesn’t fully encompass everything the company does now, and is still closely linked to one product, he added.

“But over time, I hope we are seen as a metaverse company.”

“Announcing @Meta – the Facebook company’s new name. Meta is helping to build the metaverse, a place where we’ll play and connect in 3D. Welcome to the next chapter of social connection,” it said, attaching a short video on the four apps and the meta logo.

@meta tweets remained protected as of this writing and meta.com redirected to a welcome page that outlines the branding change.

The Verge argued that a rebrand is part of Zuckerberg’s efforts to shift gears away from Facebook being known as just a social media company into plans for building the metaverse.

Zuckerberg wrote a blog on Thursday that the company’s corporate structure would not be changing, but how it reports financial results will.

“Starting with our results for the fourth quarter of 2021, we plan to report on two operating segments: Family of Apps and Reality Labs,” he said.

“We also intend to start trading under the new stock ticker we have reserved, MVRS, on December 1. Today’s announcement does not affect how we use or share data.”

On Monday, multiple news outlets published details of internal Facebook documents disclosed to the Securities and Exchange Commission and provided to Congress in redacted form.

They showed deep concerns that the Facebook user base was aging, and the platform was losing traction among younger generations.

The documents also showed that Facebook had prioritised key countries who would receive enhanced protections around elections.

To Zuckerberg’s baiters, Meta was a copycat of Google’s playbook when, in 2015, a larger holding company called Alphabet came into being.

In his first interview as CEO of Meta, Zuckerberg made it clear that unlike the founders of Google who stepped aside coinciding with the birth of Alphabet, he has no plans to give up the top job.

Instead, the change is about recognising a shift inside the company that’s already taken place, he argued.

Zuckerberg has been pouring billions of dollars — $10 billion this year alone, into building the metaverse — an expansive, immersive vision of the internet taken from the pages of sci-fi novels like Snow Crash and Ready Player One.

“I think we’re basically moving from being Facebook first as a company to being metaverse first,” he told interviewer Alex Heath in an interview recorded a day before the actual announcement.

It seems that Zuckerberg formally kicked off the project just over six months ago. The small handful of employees involved had to sign separate non-disclosure agreements. Zuckerberg refused to tell Heath the name.

“He said he had been thinking about rebranding the company ever since he bought Instagram and WhatsApp in 2012 and 2014, but earlier this year he realized that it was time to make the change,” Heath reported.

“I think that there was just a lot of confusion and awkwardness about having the company brand be also the brand of one of the social media apps,” Zuckerberg said.

The current cycle of bad news “had nothing to bear on this. Even though I think some people might want to make that connection, I think that’s sort of a ridiculous thing. If anything, I think that this is not the environment that you would want to introduce a new brand in,” Zuckerberg countered.

In the next decade, he thinks most people will be spending time in a fully immersive, 3D version of the internet that spans not just Meta’s hardware such as the Quest, but devices made by others.

Zuckerberg is pushing his teams to build technology that could one day let you show up in a virtual space as a full-bodied avatar, or appear as a hologram of yourself in the real-world living room of your friend who lives across the planet.

“At a high level, we did this segment reporting change on Monday as part of earnings. So we’re now looking at our business as two different segments. One for the social apps and one for future platforms basically. And the idea is that the metaverse work that we’re doing is not about any one of those segments. It’s not like Reality Labs is doing the work building the metaverse. It goes across all of this. The metaverse is going to be both future platforms and social experiences,” he said.

Star whistleblower Frances Haugen has not reacted on the name change yet.

The former program manager’s charter features right up on her timeline: “To start, we must demand: 1) Privacy-conscious mandatory transparency from Facebook, 2) A reckoning with the dangers of engagement-based ranking, 3) Non-content-based solutions to these problems — we need tools other than censorship to keep the world safe.”