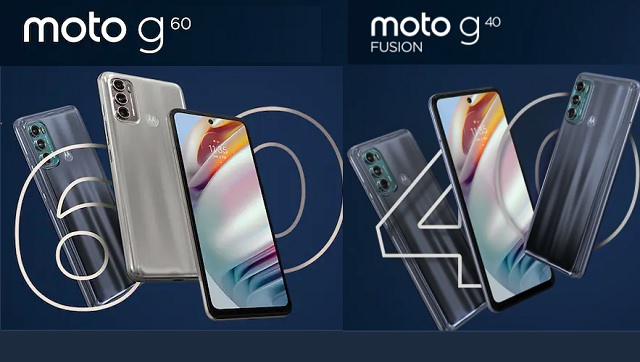 New Delhi: Motorola on Tuesday launched two new affordable Moto G60 and Moto G40 Fusion in India at 12AM. The new phones is the company’s latest offering in the G Series smartphones.

The Moto G60 fusion and Moto G40 will be available in two incredible colours — dynamic gray and frosted champagne.

Both Moto G60 and Moto G40 fusion are thoughtfully designed and exquisitely crafted. Tinted housing surrounding the rear cameras adds a touch of sophistication, the company said in a statement.

It is powered by the Qualcomm Snapdragon 732G processor with 6GB of RAM and 128GB of storage that can be expanded further using a hybrid microSD card slot (up to 1TB).

The Moto G60 sports a triple rear camera setup 108-megapixel primary sensor, an 8-megapixel ultrawide angle lens, and a 2-megapixel depth sensor. At the front, the phone has a 32-megapixel selfie shooter.

The phone is also powered by Qualcomm Snapdragon 732G for exceptional graphics and lag-free performance.

The triple camera setup of the Moto G40 fusion includes a 64-megapixel sensor along with an 8-megapixel ultra-wide lens, and a 2-megapixel depth sensor. It has a 16-megapixel front camera to capture selfies.

The phone has the same battery specification as the Moto G60. The phone also has a rear fingerprint sensor and has ThinkShield security as well.