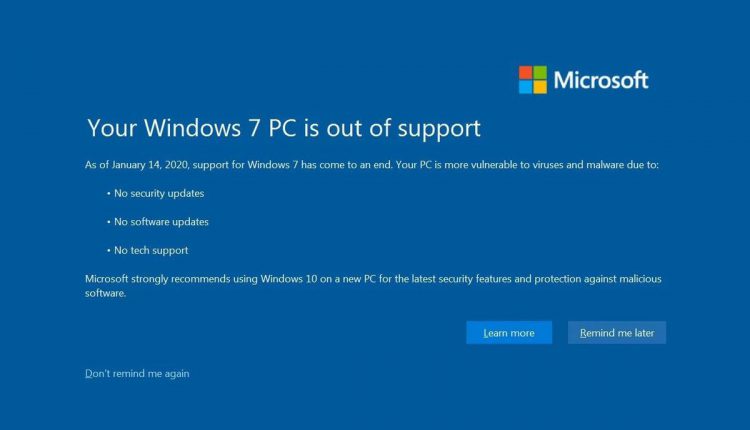 San Francisco: Microsoft has finally dropped support of Windows 7, nearly ten years after first launching the operating system. Now, users still stuck on Windows 7 will not get any software support from the tech giant.

Microsoft has also urged Windows 7 users to make an upgrade to Windows 10 to enjoy new features and continued support.

“Today marks the end of support for Windows 7. Ten years ago, when we first announced Windows 7 and Office 2010, we focused on delivering the best productivity experience of the time. But since then, thanks to breakthrough advancements in technologies like artificial intelligence (AI), we’ve been able to build tools to help you take advantage of new forms of productivity. With Windows 10, the power of the cloud makes you and your organization more productive and secure than ever. ” the company said in a statement.

According to data from Netmarketshare, currently, millions of PCs are still running Windows 7 and the operating system still runs on a massive 26 per cent of all PCs.

For older PCs users it is possible to install Windows 10. In order to run Windows 10, PCs must have a 1GHz processor, 16GB of hard drive space, and 1GB of RAM memory.

“Now, for those enterprise and SMB customers who have not yet had the opportunity to move to Windows 10, we do have ways to help you stay secure during the transition. For those who need it, we have Windows 7 Extended Security Updates (ESU) available through our cloud solution provider partners and volume licensing,” the company added.

Bigg Boss 13: The blurring lines of love and obsession