Thousands of layoffs are currently happening in the technology industry and many techies across the world are currently getting affected by it. Many employees from big companies like Google, Microsoft, Amazon, Twitter are getting fired from their jobs. A techie (software engineer) has been fired from 3 big companies in span of just 4 months. These companies include Google, Snapchat and Amazon.

While keeping his personal details concealed a person has shared his ordeal on the workplace app Blind. The post has gone viral on the internet and explains the plight of professionals in IT sector.

According to the viral post, the person was laid off by Snap in September 2022. After being fired from Snap, he joined Amazon. However, barely after just two months (November 2022) he was fired from the organisation. Consider it unlucky but he was among the 12,000 people that were recently fired from the company.

“Guess date of hire is a pretty reliable metric for layoffs when dealing with several thousands of employees, but I’m not sure what to do now. I’m very fortu-nate to have had multiple overlapping severances at this point but need to find employment soon,” writes the laid off software engineer on Blind. 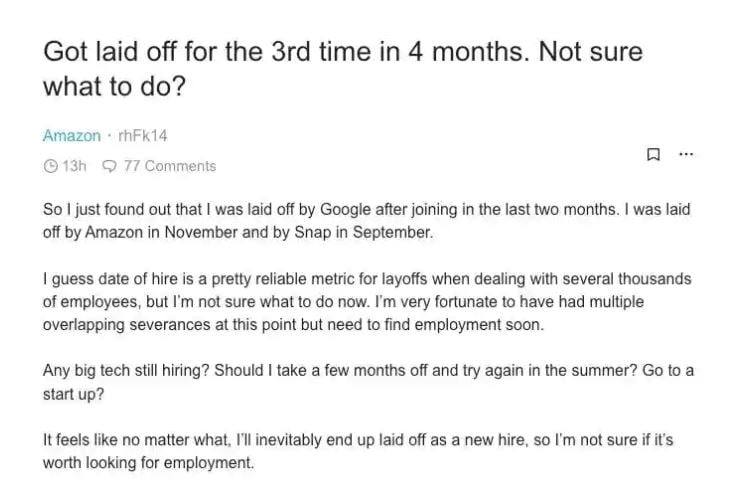 The above mentioned incident is not new across the software industry. For the pursuit of efficiency and profit, companies are laying off their employees and this has become a global phenomenon. While Amazon has fired 18,000 employees, Google has fired 12,000 employees.

In a similar incident, Kunal Kumar Gupta a techie at Google in California was also fired recently from his post. “As the news is out that Google has done a 12,000 strong layoff, unfortunately, I have been impacted by the same. After 3 years and 6 months at Google, I got an email stating that my employment has been terminated effectively,” said Gupta in a LinkedIn post.