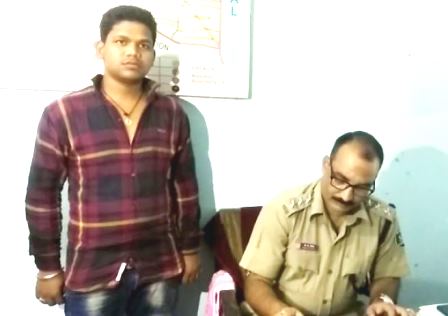 Bhadrak: Nayakanidihi Police of the district on Thursday arrested a youth for posting his picture citing some intimate moments with a college girl on social media.

The accused has been identified as Dhananjaya Mohanty, son of Gelhu Mohanty of Laxmidaspur village.

The accused, who is a student of an engineering college in Bhubaneswar, was arrested from his college hostel.

“We have arrested Dhananjaya Mohanty based on the complaint filed by the girl’s parents. According to the complain, Dhananjaya had kept repeated sexual relationship with the girl on the pretext of marriage and made the video viral on social media”informed Nayakanidihi Police station IIC Manas Kumar Deo.

According to reports, after having love affair with the +3 First Year student for some months, the accused had sex with her and filmed their intimate moments on the pretext of marriage. He used to black mail her and raped her repeatedly and threatened her not to reveal the matter before anyone. When once, the girl did not obey him to have sex, he made viral of their love making videos on social media.

The matter came to light only when the parents of the girl learned about it from some sources. They filled an FIR against the accused.

5 hours ago
Prev Next