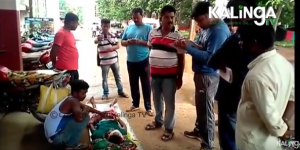 Umerkote: A youth from Kumuli village of Raighar block was hacked to death by another youth of the same village over suspected enmity on Saturday night..

The deceased, Dipak Biswas, was called to a playground over a phone call, where he was attacked with a hatchet inflicting serious injuries on him.

Dipak was declared dead in the Nabarangpur district headquarters hospital. Though the reason behind the murder is not clear, his family members suspected past enmity as the reason.

The accused, Bhabatosh Bhadra has surrendered before the local police.