You can’t believe if you don’t see by yourself: Watch the viral video of this life-size rat 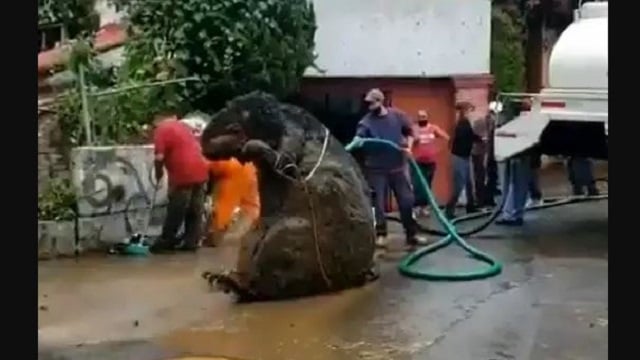 The workers cleaning the drain in Mexico were shocked when they found a ‘giant rat’. These workers were draining billions of liters of water in Mexico City. During this time they noticed this giant ‘Rat’. When the authorities investigated it, it was discovered that this fake rat was made to celebrate the Halloween festival. This ‘rat’ accidentally went into the drain.

Video of this giant rat is now being seen fiercely circulated on social media. This ‘rat’ is so huge that people standing around it are looking small. In this video, the staff is cleaning the rat. The people present there were surprised to see this rat in the drain, which was somehow trapped in the labyrinth of the drain.

Many people also said that the rat looked completely real. Photos and videos of this giant rat were shared extensively. After this, a woman came forward and claimed that this fake rat belongs to her. A lady, named Evelin Lopez, says that she made this fake mouse a few years ago for Halloween decorations.

Evelin claimed that her mouse was washed away by heavy rain. She said that when I sought help in cleaning the drain to find a rat, no one came forward. Now I have found my mouse but I have not been able to decide whether I will keep it with me or not.