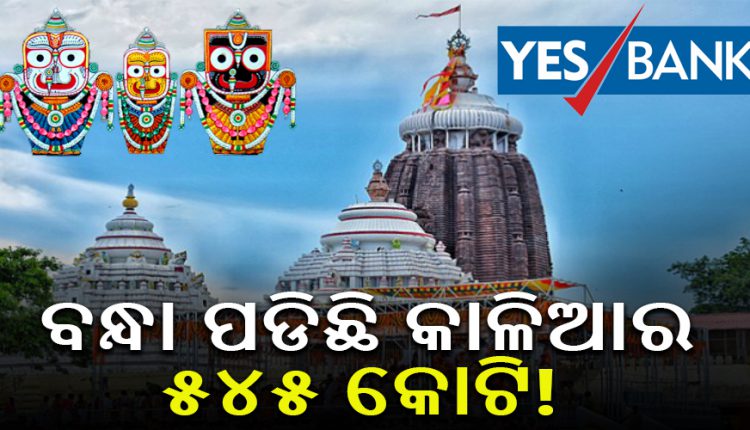 Puri: After the huge financial crisis of Yes Bank surfaced today concern raised over the fate of the Rs. 545 crore funds of Lord Jagannath’s  Srimandira fund deposited with the Bank. Ways have been found to transfer the said amount to a nationalized bank.

As per reports, Rs. 590 crore of Srimandira fund was deposited with Yes Bank as term deposit in 2019. It is said that to earn more rate of interest the huge amount had been deposited in the said private bank. While the deposit is scheduled to mature this month, concern raised as the bank has faced financial crisis lately.

It had been decided on February 5 this year to transfer the fund of Srimandira in some other bank. In the meanwhile Rs.45 crore has been withdrawn.

However, as at this point of time Yes Bank is going through financial crisis, concern also raised regarding the fate of the Rs.79 crore of the Odisha Horticulture department. When the amount had been deposited, suspended IAS officer BK Upadhyay was the director of Horticulture. Yes Bank issue is also related to his case. The Relationship Manager of Yes Bank Santosh Patnaik also was arrested along with Upadhyay. Both of them are out on bail now.

Amid growing worries among depositors after the RBI capped withdrawal limit from crisis-hit Yes Bank, Odisha Minister Pratap Jena has said that Jagannath Temple’s Rs 592 crore fixed deposits with the bank would be put in a nationalised bank after they mature this month.

The statement has come in the wake of the near collapse of the private lender raising doubts, if the depositors’ money in the bank was safe.

Jena on Friday said that fixed deposits of the temple, one of the richest in the country, will mature on March 16 and March 19. Following this, the money will be pulled out and kept in a public sector bank.

The Minister stated that the RBI restriction on withdrawal of money from Yes Bank is for savings account holders.

In the light of fast deteriorating financial position of Yes Bank, the banking regulator RBI on March 5 superseded its board and placed withdrawal restrictions capping withdrawals at Rs 50,000 per account till April 3, 2020.

Moody’s Investors Service on Friday said that RBI putting moratorium on Yes Bank is a credit negative for the private sector lender.

Meanwhile, the RBI has drafted a revival plan for Yes Bank. The government has nudged public sector SBI to lead a consortium to take control of the falling bank.

35 drugs in the race to treat new coronavirus

Three arrested for kidnapping of contractor in Odisha’s Koraput