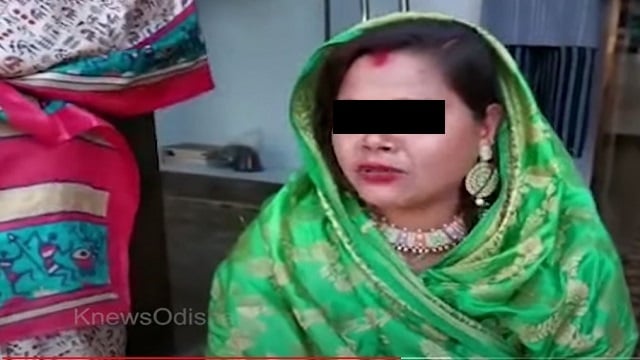 Jajpur:  In a case that is akin to the one of Tapaswini and Sumit of Ganjam, another woman in Jajpur district of Odisha protested in front of her husband’s shop demanding alimony. The incident took place in the Jarka Bazar in Dharmasala block of Jajpur district.

As per reports, Dolly Smita Sahu, daughter of late Rahas Bihari Sahu of Malada village under Bainsiria panchayat under Bari block had married Arabinda Sahu of Neulapur under Dharmasala Police limits on March 12, 2020 as per Hindu rituals. The marriage had been arranged at the Gokarneswar temple in Jarka area.

However, after four months of the marriage, family disturbance started between the two and accordingly, since then the woman is living at her father’s place along with her mother.

The woman has reportedly demanded for alimony but her husband is yet to provide the same. Reportedly, a case is also pending in the Court in this matter.

As per the woman, as she got information that her hubby is planning to marry somewhere else, she visited Jaraka Bazar today and sat on dharna in front of her husband’s cloth store along with her mother. She said that she would continue the protest till justice is earned.

After getting information Police from Dharmasala Police station reached the spot and talked to the woman and took her to the police station. She has reportedly filed a written complaint and on its basis Police are investigating the matter.

On the other hand, Arabinda’s elder brother, who is said to be the owner of the shop, has complained against Dolly. He has complained that while the case, regarding marital discord of the two are pending in the case, the woman is sitting on dharna in front of the shop and scolding.