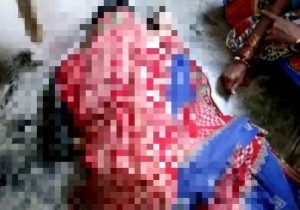 Berhampur: A woman was killed after a leaking LPG cylinder caught fire at Manikpur village under Khallikote police limits in Ganjam district on Sunday.

The deceased has been identified as Chandrakanti Mallik.

The mishap took place at around 10am this morning when the victim turned on the gas stove in the kitchen to start cooking. Unaware of the gas leakage which the LPG cylinder had developed, she ended up in causing a massive fire in the room and was charred to death on the spot.

The fire was brought under control only after Khallikote Fire Brigade team reached the spot getting intimation and intervened.

Khallikote Police sent the body for postmortem and registered a case of unnatural death.