Woman Killed In Road Accident in Sambalpur District Of Odisha 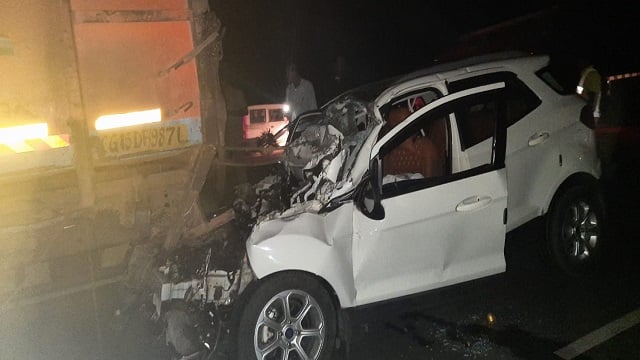 Sambalpur: A woman has been killed and five others including two minors sustained critical injuries in a car-truck collision near Rengali square in Sambalpur district of Odisha in the wee hours of Saturday.

The deceased has been identified as Manjulata Agarwal of Khetrajpur in the district.

According to reports, Sourav Agarwal of Khetarajpur, his wife Neha Agarwal, his mother Manjulata Agarwal, 7-years-old son Reet Agarwal, 9-years-old daughter Ritika Agarwal and neighbour Puja Sharma went to Sri Shyam Mandir in Jharsuguda in an eco-sport car. The car driver lost control over its wheels and hit a truck from behind while they were returning from the temple.As a result all of them sustained critical injuries.

On getting the information, their relatives arrived at the spot and rescued them. They were immediately admitted to the VIMSAR hospital where the doctors declared Manjulata brought dead whereas others have been shifted to a private hospital in Bhubaneswar as their health condition deteriorated.

Till the last reports came in, Sourav’s two kids were critical.

Germany To Makes Covid-19 Test Mandatory For All Air Travellers