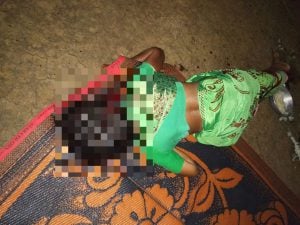 Nuapada: A woman was hacked to death by her daughter-in-law over a family feud at Nuajhar Nagathada village under Khadiala police limits in the district late last night.

The deceased has been identified as Gunabati Meher.

A heated argument erupted between the deceased and her daughter-in-law Mili Mallick over some issue in the wee hours today. In a fit of rage Mili attacked Guanabati with an axe kept at the home and brutally hacked her. Guanabati sustained critical head injury in the attack and died on the spot.

Getting information on the incident, Khadiala Police reached the spot and arrested the accused daughter-in-law this morning and seized the dead body.