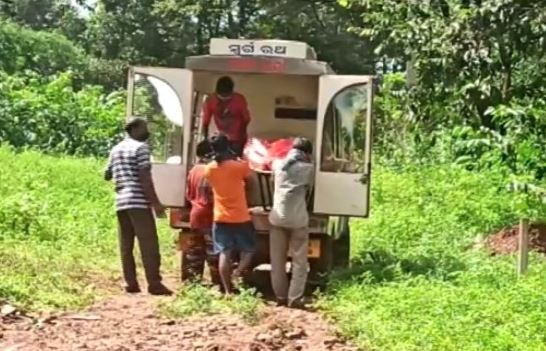 Joda: The body of a woman was recovered from her locked house in Keonjhar district of Odisha on Saturday. The body was found in Rupa Sahi of Bileipada village under Joda police limits in the district. Identified as Suren Karua, husband of the deceased woman has been detained by Police in this connection.

The deceased has been identified as Sunita Karua, the daughter-in- law of Suru Karua of Bileipada village.

As per reports, following complaints by the villagers of a foul smell emanating from the closed house of Suru Karua in Bileipada village, Joda police reached the spot and initiated investigation. Accordingly, body of Sunita Karua was found inside the house. Police seized the body and sent it for autopsy. Police have suspected that she was dead about three to four days ago.

A case has been registered in this connection and Police have detained Suren Karua, husband of the deceased and interrogating him to find the truth.

While further investigation of the case is underway, under which circumstances the woman died, is yet to be ascertained.

It has been learnt that following death of his first wife, Suren had married Sunita. He was living along with his father, and wife in the rented house from where the body was recovered.

On the other hand, Suru Karua, father of Suren has said that his son often consumes alcohol for which the couple gets engaged in verbal spat and fighting regularly. However, he said that he is unaware about how Sunita died.

A case has been registered in this connection and further investigation is underway while Police have said that the reason behind death of the woman will be clear, once the Autopsy report comes.