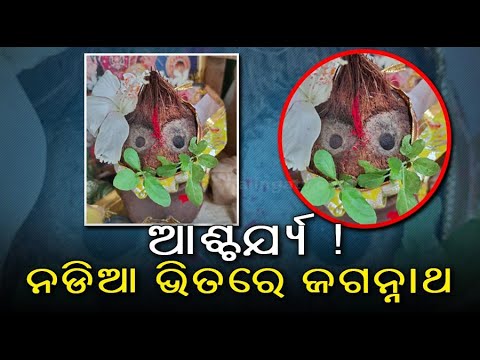 Bhubaneswar: The episode seems unbelievable but true. A woman recently found face of Lord Jagannath in a coconut. The incident took place in the family of Pradipta Samantary, a resident of Bhawani Villa Apartment in Nayapalli area of Bhubaneswar in Odisha on Tuesday.

As per reports, one Manasi Samantray of Bhawani Villa apartment in Nayapalli area asked the apartment security Arabinda to buy a coconut for her from the nearby shop. Accordingly, Arabinda bought a coconut from the shop of China bhai near Balunkeshwar temple. The shopkeeper had given the coconut without removing the outer husk of the coconut.

As the security handed over the coconut to the woman and she removed its outer husk to use it in worship she could not believe herself what she saw.

The woman who first witnessed Lord Jagannath in the coconut said that at the present time when coronavirus pandemic is wreaking havoc in the country, such godly incident is an indication from the God that our country will be free from the jaws of Coronavirus in the near future.

“I have kept the coconut at home and worshiping it regularly,” she added.

Woman And Daughter Die, Son Critical In Self Immolation Bid At Odisha’s Nayagarh