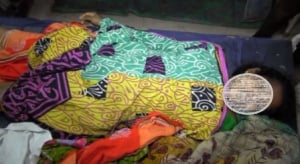 Bolangir: A woman died late on Tuesday night after giving birth to a baby girl at Bolangir District Headquarters Hospital, Bolangir. Family Members alleged that her demise occurred due to negligence by hospital staff, including concerned doctors.

Normal health services were affected for a few hours as relatives of the deceased and the locals agitated inside the hospital.

30-year -old Jayanti was admitted to the hospital on Tuesday. Her family claimed her condition started deteriorating immediately after the delivery of the child. The concerned doctors and nurses did not attend to her despite repeated requests, alleged her husband Arjun Salema.

“Jayanti was crying due to abdominal pain and continued to bleed after the delivery. Though we requested the doctor and nurses to save her, she lay unattended for a long time, which led to her death”, said Arjun.

School of Yoga opened at KIIT on International Yoga Day