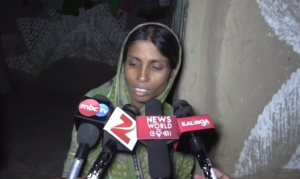 Kendrapara: Making a mockery of the various schemes launched by both the Union and State governments to save and empower the girl child, a mother in Kendrapara district has allegedly sold her new-born girl child to an unknown person for Rs. 12, 000 due to poverty.

32 year-old Geetanjali Maharana , a resident of Righagarh village in Rajnagar block, delivered a baby girl at a private hospital in Kendrapara town at around 11.30 pm on Tuesday.

Disappointed with the birth of the girl child, Geetanjali, who already has two daughters, sold her new born daughter to a childless person for Rs 12,000.

“We are poor people. We do daily wage work to meet our basic needs. I wanted a son as we already have two daughters. Another daughter in our family will make our life more difficult. So, we decided to give our new born daughter to a child less person,” said Geetanjali.

“We have not sold the infant. We voluntarily handed her over to another person. In return, we received the amount we had paid to the nursing home by way of medical fees charged for the delivery,” he claimed.

Local ASHA worker Annapurna Maharana, who accompanied Geetanjali to the hospital, has reportedly urged the couple not to sell the girl child.

In 2015, the Narendra Modi Government had introduced the “Beti Bachao-Beti Padhao” (BBBP) campaign aiming to arrest the declining child sex ratio in the country.