Winter in Odisha experienced, the weather in the state shall remain dry and the temperature is expected to drop further. 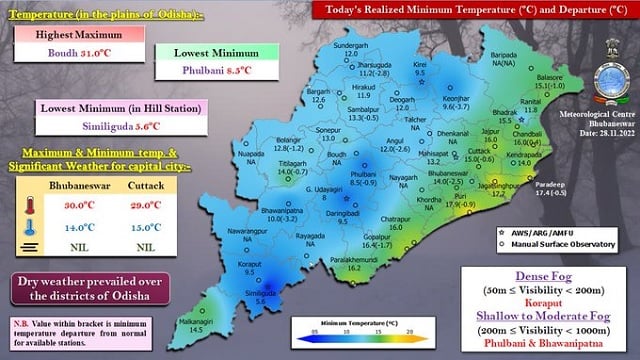 Bhubaneswar: Temperatures in most parts of the State has been seen to be falling steadily thus implying winter has set in Odisha in full swing.

The minimum night temperature in Semiliguda of Koraput has been recorded at 5.6 degrees Celsius which is the lowest in Odisha.

The lowest night temperatures across various places in Odisha are as follows:

Due to the fall in temperature, the streets were seen to be deserted in the night time.

Further it is noteworthy that, the weather in the state shall remain dry and the temperature is expected to drop further.

Cold air is expected to blow from the west direction hence temperatures are likely to fall further across the State.

What are the signs and symptoms of Vitamin B12 deficiency? Know here