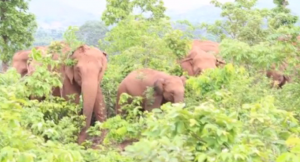 Champua: People in villages under Champua forest range in Keonjhar district have been in a state of panic for the last three days as a large herd of wild elephants from Jharkhand jungle has entered the area.

The jumbos were seen moving freely on roads and agriculture fields at Kondra village on Monday.

A herd of around 30 elephants, including tuskers and calves, has already caused extensive damage to the standing vegetable and paddy crops in this region.

Forest officials have asked the locals to stay at safer places and not to attack the jumbos. They have also informed that efforts are being made to drive away the elephants into the jungle.