We would strive to make Odisha No. 1: Naveen 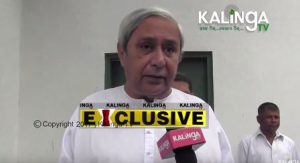 Bhubaneswar: Dedicating his ‘Outlook India Speakout Best Administrator award’ to the people of Odisha, Chief Minister Naveen Patnaik has said his government would continue to work towards making Odisha the No.1 state in the country.

Talking to Kalinga TV before boarding the flight back to Bhubaneswar from New Delhi today, Naveen said, “My message to them is that the award is dedicated to the people of Odisha and we would continue to strive to make Odisha the no.1 state in the country.”

To another question pertaining to his meeting on the IOCL standoff with Union Petroleum and Natural Gas (PNG) Minister Dharmendra Pradhan in New Delhi, the CM informed that both the sides have reached an agreement and a decision had been taken.

Asked if he is happy and satisfied about the ongoing rescue work at the site of the Kalinga Utkal Puri-Haridwar Express derailment in Uttar Pradesh involving a number of Odia passengers, Naveen answered in the positive and said he was in touch with the Union Railway Minister Suresh Prabhu, who had conveyed to him that the three to four persons from the State hurt in the mishap were recovering fast.