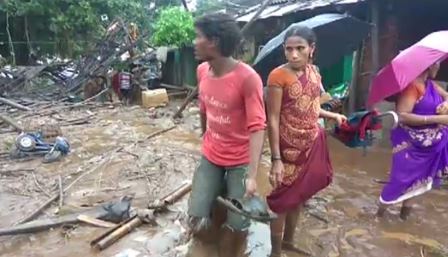 Rayagada: Water levels of Kalyani and Nagavali rivers have started to recede in Kalyansinghpur block of Rayagada district. However, the misery of the flood affected people still continues.

All the belongings of the people have been swept away while their houses are full of mud.

“We have taken shelter in a school as we have nothing left except our life. The government should provide us adequate compensation,” said a victim adding this is the first time in the last 25 years that he witnessed such fury of flood.

Sources said many people are also still marooned, especially in the low lying areas like Kumbariguda, Majhiguda and Kalyansinghpur area.

Water has covered hundreds of hectares of agricultural land in Seshakhal and Bairagi and Halua panchyats.

Road connectivity has been severely affected as bridges and roads at different places have been washed away.

On the other hand, heavy rain continues on the upper catchment of the region causing the Vamsadhara river to flow above danger mark in Kashinagar. 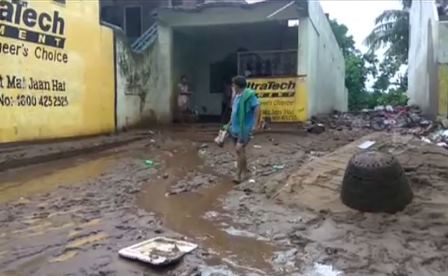 The district administration has opened 13 free kitchens to provide cooked food to the affected people and more than 3000 food packets have been airdropped by a chopper of the Indian Air Force (IAF).

A special flood control room has also been opened.

A helpline number – 06856224062 – has also been launched to get and provide information about the flood and situation to the people.

Special medical teams are on the spot to provide health services to the people. Thotapalli Barrage has been opened to allow flood water to pass.

Apart from the district administration, many voluntary organizations are also providing food, clothes and drinking water.