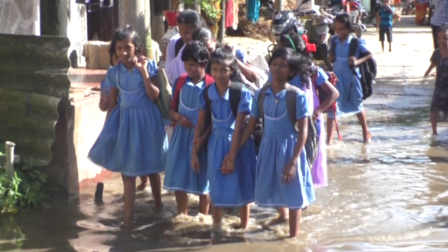 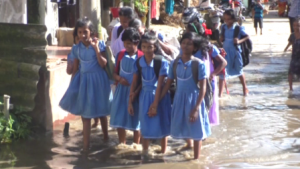 Bhadrak: In a perfect example of manmade monsoon woes in remote areas of the State, people of Bhuinpur village under Chandbali block in Bhadrak district are suffering waterlogging in the locality for the last several years. Villagers have claimed that their efforts to get the administration to solve the problem have failed due to one-upmanship between local political leaders.

Venting out their ire before Kalinga TV over the issue, some locals in the Bhuinpur village informed that even minor rainfall in the locality causes waterlogging in the streets and creates a flood like situation. The situation turns worse in the monsoon season when torrential rain keeps lashing the village, they added.

Notably, Bhuinpur village, inhabited by around 700 people, wears the look of a flood-hit village during the monsoon in the absence of proper water drainage facilities. The situationn poses a serious concern for school children in the area who are left with no option but to wade through rainwater and invite various diseases in the process.

Contacted over the issue, former Sarpanch of Nandpur panchayat Prasanna Jena said, “The claim of political rivals is not correct. The problem of water logging arose out of a land dispute a few years ago, when a villager blocked a drain passing through a piece of land which he claimed belonged to him.