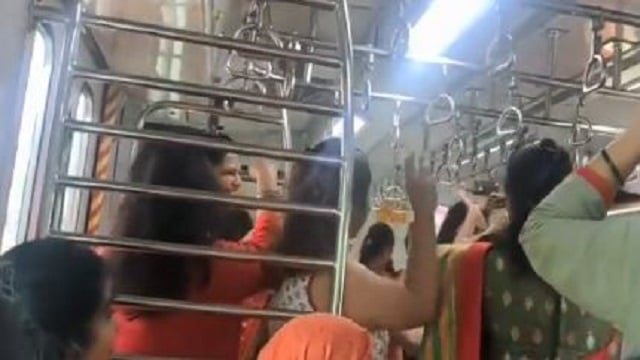 India is a land of diversity that celebrates festivals from all religions and ethnicity with peace. The festivities in India have officially begun. As Navratri began this week, Garba performances have become common across the country.

Recently, a video has gone viral of a group of women performing Garba on a Mumbai local train. A Twitter user id named Mumbai railway users, shared a short clip that shows a group of women showing their Garba moves. The viral video will surely brighten up one’s day.

In the viral clip, a group of women were performing Garba by making a circle and danced to a Gujarati song. Many passengers were seen enjoying the scene and were capturing the moment in their cell phones. The ladies were extremely happy while performing garba on train. The scene was quiet enthusiastic as the women were dancing very passionately.

There are many videos of Garba which went viral but this one was quiet unique as the ladies performed Garba on train. This video has got more that 2 lakh views and 331 retweets. Many users have also commented on the video and have praised the ladies. One of the Twitter user wrote that it is for those who say that there is no place for small happiness in Mumbai. This video is no less than a surprise to all of them. At the same time, another user called the video touching and also thanked seven women who have taken a step to get a place for Garba.

Watch: Influencer dances to ‘Dilbar’ on a busy…

This year Navaratri began on September 26. It is that time of the year when cities across the country are decked in the festive fervour of the nine-day festival. The enthusiasm amongst people is especially high after the celebrations were dampened since the last couple of years due to COVID restrictions.

6 killed, 15 injured in bus-truck collision in UP district