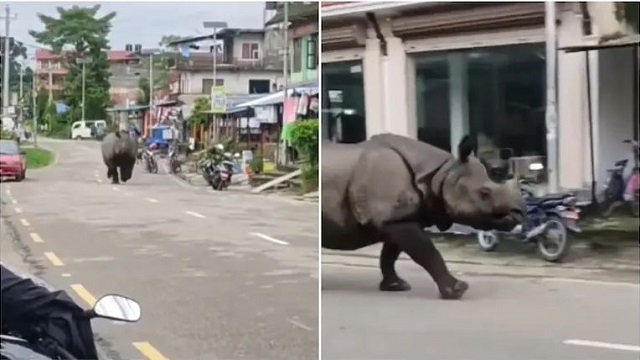 There have been major concerns about people encroaching deeper and deeper into natural habitats in the past few years. This causes inevitable encounters of humans with wild animals which is unpleasant and scary for both the parties.

Adding another example to the instances which have proven this concern to be a real issue, a video of a rhinoceros has now become viral.

The video was posted by IFS officer Susanta Nanda, with the caption “When the human settlement strays into a rhino habitat… Don’t confuse with Rhino straying in to a town”. The video shows a rhino running through an empty street of a populated town. There are a lot of onlookers visible in the background, and a person can be seen scrambling out of a rickshaw and inside a house to get out of harm’s way.

When the human settlement strays into a rhino habitat…
Don’t confuse with Rhino straying in to a town pic.twitter.com/R6cy3TlGv1

People agreed with Nanda’s comment and some wondered why settlements were allowed near forests. People also enquired about the animal’s welfare.

Why does the government allow any settlements near the forests or animal habitats? Can’t they be removed, if they really want to?

Exercising for coexistence with human society as there is no alternative.

Feel very sad to see this! Poor fellow, where is running for food?

Some people also thought it looked scary and straight out of the movie ‘Jumanji’.

Looks straight out off Jumanji

A similar incident had happened in Manas National Park, Assam, where an agitated rhino was seen attacking a tourist vehicle. The visitors were saved by forest guards.