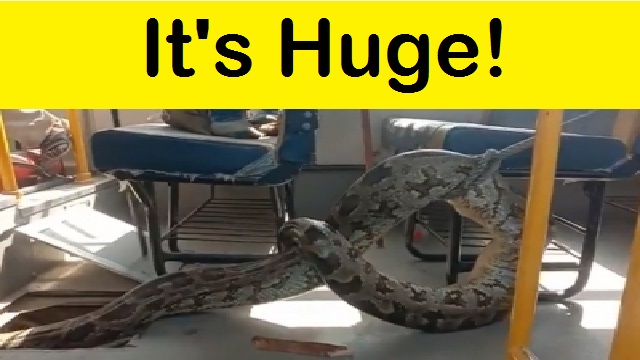 Rae Bareli: A huge python was found hiding under the seat of a parked school bus of Ryan Public School in Uttar Pradesh’s Raebareli on Sunday.

Circle Officer (CO) City Vandana Singh and City Magistrate Pallavi Mishra reached the spot after getting the information and called the Forest Department team to the spot and got the python rescued.

The video of python getting rescued by Forest Department officials has gone viral on social media. In the video, an official can be seen pulling the python from the bottom of the school bus.

According to Forest Department officials, the weight of the python is about 80 kg and its length is 11 and a half feet.

After the rescue operation that lasted for about an hour, the python was somehow brought under control and was safely released in the forest of Dalmau. Fortunately, the school was closed as it was a Sunday, so there was no loss of life.

Sources said the school bus was parked in the driver’s village. Some goats were running next to the bus and the snake was probably attracted by them. However, the locals raised a hue and cry when they spotted the serpent. The snake then slithered into the bus to hide.