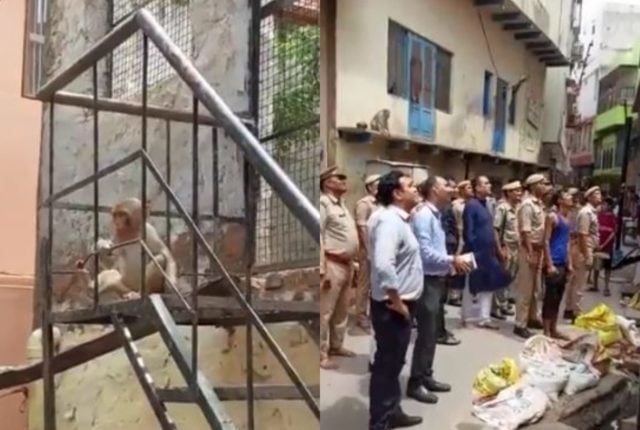 Mathura: Monkey menace in Mathura and Vrindavan is common and despite repeated demands, no efforts have been made to rid the holy city of simians.

Recently, District Magistrate Navneet Chahal got a taste of the menace when a monkey snatched his spectacles in Vrindavan.

A video of the incident has gone viral on the social media.

Here is the Video:

If you had not seen someone more powerful than District Magistrate of a District in India😊
Monkey snatches glasses from DM Navneet Chahal in Vrindavan, Mathura.After some pleading,the monkeys returned the glasses. pic.twitter.com/YTERfjh62G

The video shows the official and several policemen gathered under a building and figuring out a way to retrieve the glasses.

Some monkeys can also be spotted jumping around the building.

After keeping the men on their toes for some time, the monkey finally gives back the glasses.

Monkeys in the holy city are known to snatch food, purses, bags and spectacles of devotees but often return them if offered a food of their choice.