The biker sustained serious injuries following the accident. He was rescued and rushed to the local hospital for treatment. 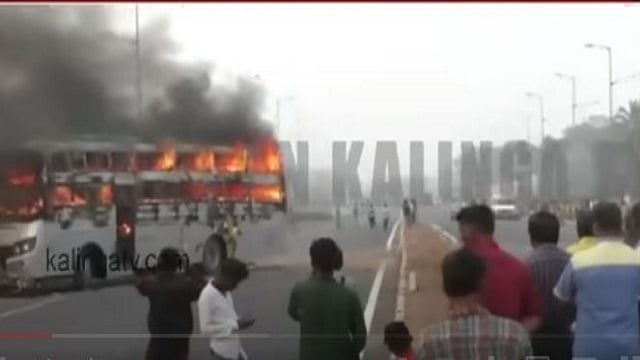 Baripada: Tension ran high on National Highway No 18 in Baraipada Town of Odisha’s Mayurbhanj district today after a group of irate locals torched a passenger bus as it hit a biker.

A biker was reportedly standing on the roadside near the Jubuli Filling Station on National Highway No 18. In the meantime, a passenger bus hit him while it was going towards the Station Bazar from the Murgabadi area.

The biker sustained serious injuries following the accident. He was rescued and rushed to the local hospital for treatment.

Soon, some locals gathered on the spot and fumed over the accident they set the bus on the fire.

A team of cops from Baripada Town Police Station rushed to the spot and started an investigation into the matter. However, they are yet to establish the identity of the injured biker.

Maruti Suzuki’s upcoming electric SUV to be showcased in Auto Expo 2023, to offer a range up to 500km