Wild animals are always good in the forest, this viral video reveals why 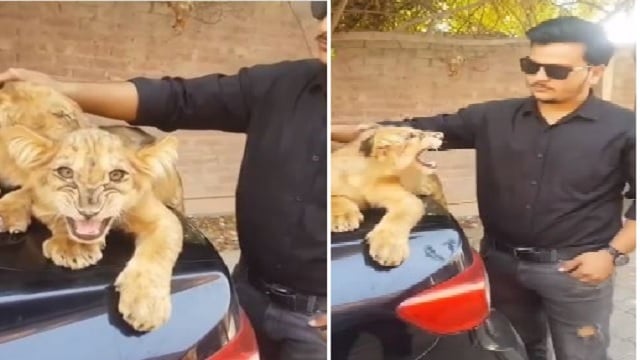 Animals like tigers and lions are aggressive by nature as they get food by hunting other animals or human beings. For this they  create a fear in other animals as well as humans. But humans think they can tame everything that they want. They have to get over this idea. A few things are best in the wild, where they belong, and no one should try to take them away from their natural habitat. Recently, a video went viral where a man was seen caressing two lion cubs got mocked on social media for what happened when one of them snapped backed at him.

Animals, like lions and tigers, belong in their natural habitats and not in the hands of human beings as pets. These animals are quite dangerous in nature. In the viral video, the two baby lions were sitting on the trunk of the car. The man was trying to nuzzle them affectionately. But the attempt went wrong. One of the cubs’ aggressive reaction was terrifying enough for the man to take a step back.

The viral clip was shared by the Instagram user named basit_ayan_3748. The man was trying to calm the aggressive baby cub but it didn’t go well while filming the scene. He wanted to hold the lion cub but it escaped from his hands. The video has got more than four million views. Many users have trolled the man that he thought the two lion cubs as pet dogs and pet cats. The video has gathered more than 2.8 lakh likes and more than one thousand users have commented on the clip.

Watch: Influencer dances to ‘Dilbar’ on a busy…