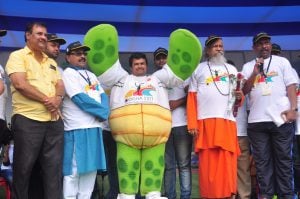 Bhubaneswar: Chief Minister Naveen Patnaik felicitated all the five persons who were dressed as Olly, the mascot for the 22nd Asian Athletics Championships, at the State Secretariat on Wednesday. But Amar Kumar Behera, a security guard, who was the first Olly to participate in Pathosav and visit all schools and colleges for campaigning was conspicuously missing at the felicitation.

However, after a post on social media pointing out the omission went viral, Sports Director Vineel Krishna admitted the goof-up and promised to felicitate Behera.

“We will honour him as well. It seems the agency engaged inadvertently missed his name from the list. Thanks for bringing it to our notice,” read his tweet.

“I heard from fellow Olly(s) that they were felicitated. I felt a bit sad on being left out. Like others, I had also done my best to promote the sporting extravaganza. But I am happy that the goof-up was noticed,” Amar told Kalinga TV. Amar had been roped in by the BDA for task.
As per information, the persons who played ‘Olly’ were presented cash prizes and flowers.
AAC 2017Amar BeheraMascotOdishaOllyVineel Krishna
0 331
Share
You might also like
State