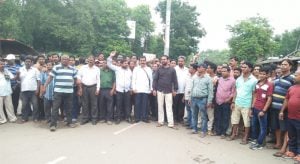 Burla: The Director of Surendra Sai Institute of Medical Sciences and Research (VIMSAR) Aswini Kumar Pujahari was heckled by a group of Post Graduate (PG) students on Monday morning, worsening the ongoing stand-off between the two sides further.

The incident occurred when the Director was on his way to the campus premises from his residence this morning.

VIMSAR students have called an indefinite strike while the residents of Burla have also called a 12-hour bandh in the town today.

Normal life came to a halt in different parts of Burla town in response the bandh called by the local residents as well as  the strike by the juinior doctors of VIMSAR to press their demands for safety and security in the campus.

Vehicular communication came into a standstill in and outside the town. Besides, Educational institutions, shops and other business establishments remained closed in the town due to the bandh.

The campus has been in turmoil since Saturday when the PG students of the institute pelted stones at the residence of Pujahari after a tussle between the junior doctors and the local residents over the issue of alleged manhandling of the kin of a patient by the junior doctors.