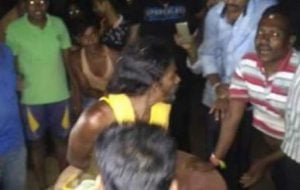 Cuttack:  A self-proclaimed Godman, known as Hari Baba was tied with ropes and beaten black and blue by a group of angry villagers on suspicion of practising witchcraft in Cuttack district in Odisha on Monday evening. The angry villagers also torched his Ashram before the local police rescued him.

The incident occurred at Sadhaknagar village in Nischintakoili block in the district after an adolescent girl blamed Hari Baba for her untimely headache and uneasiness after returning from the ashram.

The girl, who is in class X, informed her parents that she was feeling uneasy and was having a severe headache after visiting the ashram of the Godman. Later, her parents told the fellow villagers about the incident. The villagers then took the law into their hands and punished the Godman, suspecting him of being involved in witchcraft.

A few days back, a group of girls studying in class X, had complained similar health problems after visiting Hari Baba’s ashram and were admitted to Nischintakoili hospital. But the doctors at the hospital could not diagnose the reason for their severe headache and vomiting.

That incident had shaken the mind of the villagers on Hari Baba, but they waited for the right time to teach a lesson to the Godman. Monday’s incident involving the teenage girl gave them the excuse to pounce on the self-styled godman.

Local police have rescued Hari Baba from the angry villagers and registered a case against him in this connection.