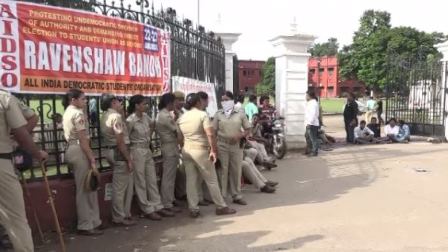 University Vice Chancellor (VC) Prakash Chandra Sarangi said that the election to Students’ Council for the 2017-18 session was put on hold following disturbance by students. A fresh date for the election will be declared later by the varsity authorities, he said.

According to a notice issued by the university authorities, election to Students’ Council for the session 2017-18, which was scheduled to be held on 22-23 August, has been kept in abeyance in view of the bandh call by different disruptive forces. The election is put on hold until further orders.

Students staged a protest in front of the university main gate demanding students’ union poll instead of students’ council election.

Commissionerate Police has deployed adequate security forces to avoid any untoward incident in the premises of the University.