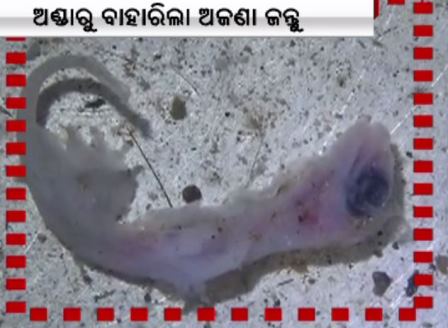 Bargarh: In a bizarre incident, an unidentified creature was found in egg served to small kids at the Anganwadi centre at Govindpali village of the district on Thursday.

While the weird animal is yet to be identified, some locals said it could be a small crocodile while others said it may be a ‘dinosaur’.

People from nearby villages gathered at Govindpali village to have a glimpse of the strange animal.

According to reports, Chittaranjan Suna’s daughter had got four eggs from the Anganwadi centre at ward no-15 on July 18. The strange creature was spotted after Chittaranjan’s wife Kausalya Suna boiled the eggs to give to her children.

“My daughter was given four eggs in the Anganwadi centre on Tuesday. I boiled them as my children wanted to eat egg today morning. But I found the strange animal when I broke it to serve it to them after boiling,” said Kausalya.

The locals have been alleging that the children are being served poor quality of food materials like chhatua and eggs at the Anganwadi centre. Now, the incident has strengthened their allegation. 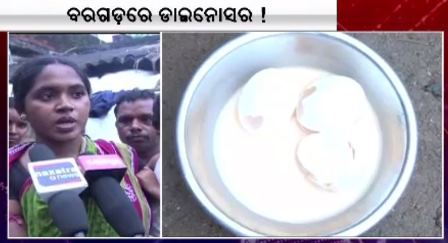 “We have repeatedly raised question over the quality of the food materials provided to the children. But nobody paid any attention. I hope this incident will give the higher officials an idea about the kind of food the small children are being given and will help solve the problem,” said a villager.

Meanwhile, the district administration sought a report from the CDPO and ordered him to provide better quality of materials to the kids.

“I have sought a report on the matter and will take action based on the report. Besides, I have urged the CDPO to provide good quality of food to the children. They will check the quality of the eggs before buying them from the shopkeeper,” said Sub-Collector Biswajit Mahapatra.