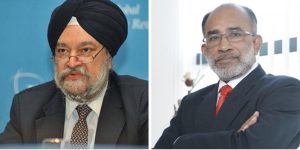 New Delhi: 9 new Ministers will take oath today at 10:30 AM in the Cabinet Reshuffle to be effected by PM Modi. They will include two former IAS Officers, one former IPS and a former distinguished diplomat.

Former Diplomat Hardeep Singh Puri & former IAS from Kerala K Alphons (Demolition Man) will be the key faces in Modi Cabinet. They are apolitical people and not elected members of Parliament.

Six Ministers have already resigned from their posts. Neither JD(U) nor AIADMK will be part of the Govt immediately.