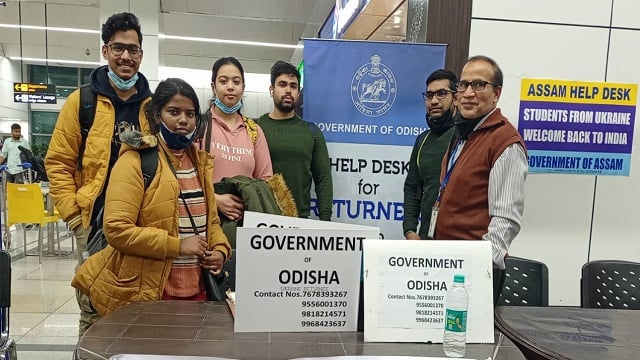 Bhubaneswar: Just after a day of an Indian student’s death in Ukraine amid the rising tension with Russia, five more students of Odisha return from the war affected early this morning.

More 20 Odia students will also arrive in Delhi today, added reports. All the arrangements have been made at the Odisha Bhawan for their stay in Delhi.

As many as two flights have departed from Poland today carrying 218 students in one while 219 in another plane. Adding to it, there will be 26 more flights in the next three days to bring back Indians from the Ukrainian border.

The Indian government has intensified Operation Ganga to bring back Indian nationals from war-torn Ukraine. The Indian Air Force has also joined hands in the evacuation operation.

The Indians are being flown to India from neighboring countries of Ukraine via Bucharest, Romania, Budapest, Hungary, Poland, and the Slovak Republic.

The Indian Air Force’s military transport aircraft – the C-17 Globemaster – left for Romania at 4 am Wednesday to bring Indians from Ukraine under the Centre’s mammoth rescue programme Operation Ganga. The aircraft took off from its home base – the Hindan Air Force Station – near Delhi.

According to the Foreign Ministry, there are no more Indian nationals in Kiev. The Indian embassy in Kiev has also been closed.

More than 20,000 Indians were stranded in Ukraine out of which about 60% have already returned.

The deceased indian student has been identified as Naveen Sekarappa, a resident of Karnataka. He was student in 4th year in Kharkiv national medical university.