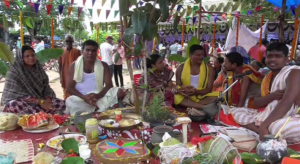 Keonjhar: In a unique experiment, residents of Ghasipura village in Anandapur area of Keonjhar district on Tuesday conducted a ‘marriage’ ceremony between two trees — a Banyan tree and an Ashvattha (Sacred Fig) tree – aiming to create awareness among the people to plant more trees and save the forests around the village.

The marriage ceremony, the first of its kind in the district, was held as per Hindu rituals. The villagers decorated the Banyan tree and Ashvattha tree as Groom and Bride respectively. Alekh Prusty, a villager, played the father of the trees. A special mandap was erected for the ceremony.

Talking to Kalinga TV, Alekh Prusty said, “We conducted marriage between a Banyan tree and an Ashvattha tree to create awareness among the people about the value of trees in the era of global warming”.

“We also believe that conducting such marriages brings good fortune to the society,” he added.

The villagers also took out a procession of the newly married couple in a decorated palanquin on the village road, amit dancing and singing to the tune of band party.

Hundreds of people around the village attended the marriage ceremony.

Benefits of black rice: Good for diabetes, weight loss, and…