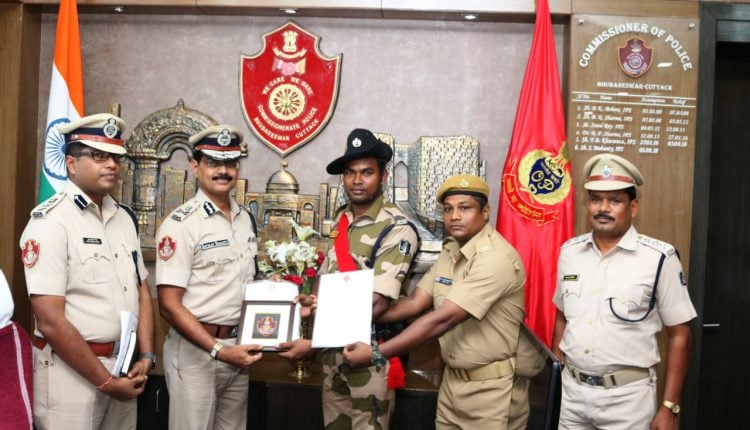 Bhubaneswar: Police commissioner Satyajit Mohanty today felicitated two police personnel for saving the life of a train passenger who fell down from a running train in the wee hours of Wednesday.

Police said that Umesh was on his way back to home from Chennai in Ernakulam-Patna Express when he fell down from the running train. Umesh with multiple injuries somehow managed to call the police control room.

TTE beaten up by cops for asking to show ticket, video goes…

Hurry Up! Last Chance To Get Government Job Without Written…

Hurry up! Only one more day is there to apply for this…

The police control room subsequently intimated PCR 7 and both Hati and Samantray rushed to the site searching for the injured on the track. Hati located him on the railway tracks between Vani Vihar and Mancheswar and provided him first aid. Hati also lifted him on his shoulders to a distance of around 300 meters to reach the PCR van.

The police personnel also rushed him to the Capital Hospital and intimated his family members at Bihar. Umesh was later referred to the SCB Medical College in Cuttack.

A sneak peek into OnePlus 7 Pro & its competitors in India