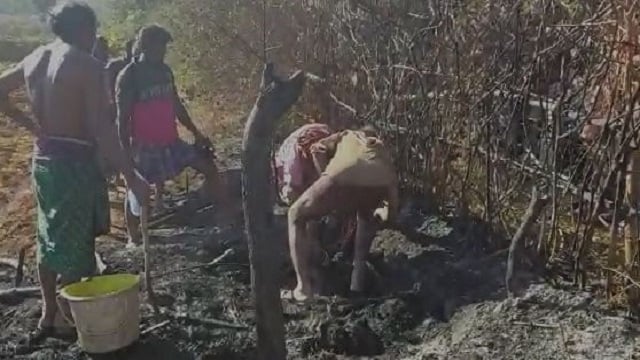 Rayagada: In a heart-wrenching incident, two minor girls were charred to death as a straw hut, which they had set up to guard their vegetable garden, caught fire at Lakris village of Taljagi panchayat under Kashipur Police limits in Rayagada district today.

According to the information received, the deceased children were in the hut to guard the vegetables when their parents went home to eat. However, the straw hut suddenly caught fire and burned completely killing the girls.

Two vehicles that caught fire turned into ashes in…

Fire breaks out at Utkal University, Firefighters on the…

The nearby family went to the spot after they saw the hut burning. Unfortunately, the straw hut had completely turned into ashes and the minor had died by the time they arrived.

Kashipur Police station IIC, Sunil Arun Kumar Nayak along with his team went to the spot and started an investigation into the incident.

Postmortem of the bodies was said to have been conducted in the presence of Kashipur Additional Tehsildar Kush Garda, who is in-charge of the magistrate.

Till the filing of this report, it is yet to be known how the straw hut caught fire.