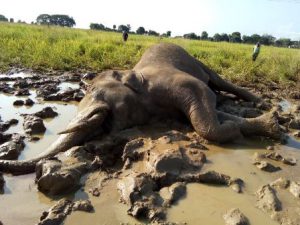 Athagarh: Carcass of a tusker was recovered from a paddy field in Paikarapurpat area under Khuntuni Reserve Forest on Friday.

Some locals spotted the dead elephant in the morning and called up the officials of Athagarh Forest Division to report the matter.

After reaching the spot and conducting a preliminary investigation, the forest officials suspected that the death of the elephant could have been old age related as no injury mark was found on the body of the animal.

“Veterinary officials have been rushed to the spot to investigate into the elephant death. However the exact cause could be ascertained after the autopsy is conducted of the carcass,” said Athagarh Forest Range official Ratnakar Das.

Locals have claimed that Athagarh has witnessed an increase in elephant incursion in recent times and it needs an immediate attention by the district administration to find out a solution to it.