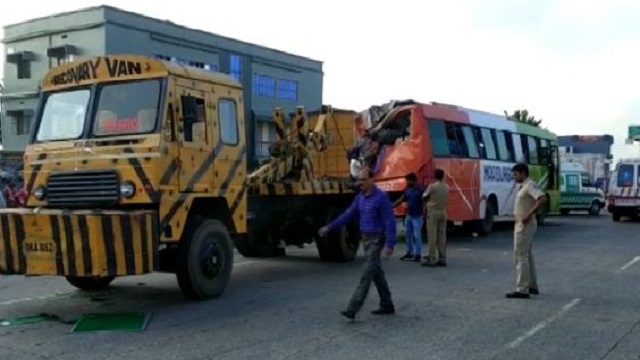 Jaleswar: A Pilgrimage bus was reportedly got hit by a container truck near Laxmannath Toll Plaza on the NH-60 here in Balasore district on Thursday. As many as 20 passengers were injured and 7  sustained critically injuries in the accident. The driver and helper of the container truck were also injured in the mishap.

local people rescued them and admitted them to Baleshwar main hospital with the help of an ambulance. Locals rushed the injured passengers to the G.K Bhattar Hospital in Jaleswar for immediate treatment.

Elderly man dies after a passenger bus hits him in…

According to sources, a West Bengal-registered private bus named Jaibaba carrying over 50 pilgrims en route to Puri from Murarai area in West Bengal was hit by a speeding container truck from behind near the Laxmannath toll gate on the NH-60 under Jaleswar police limits at around 6 am today.

Sources said that three passengers including an elderly person were stuck inside the bus for long hours following the incident. They were rescued by help of locals and police officials.

On being informed about the accident, the Jaleswar police reached the spot and initiated an investigation. Further reports are awaited.